There are many ways to make code easily reusable in Apple platforms. For instance, although not highly recommendable, code can easily be placed in Swift files and copied from one project to another. This method works well in general, but it is hard to manage versions and it is prone to errors.

Introduction to Frameworks and Package Managers

Traditionally, on Apple platforms, reusable code will be packed and distributed as frameworks (bundled files with extension .framework).

In the last few years, other package managers have become very popular, like CocoaPods, Carthage or the new Swift Package Manager.

These package managers do not require for the code to be put inside a framework. They can pack and distribute the code directly without the need for any project whatsoever.

However, in my experience, I have found some major benefits when using frameworks for my libraries and SDKs:

Furthermore, Frameworks can have CocoaPod dependencies installed via Podfile while being distributed as a CocoaPod with a podspec file.

On this article we will cover how to create an Xcode project for a framework for multiple platforms (iOS, OS X and tvOS) while reusing source code and unit tests. We will also cover distribution via CocoaPods and CocoaPod dependencies.

Once you have some reusable code that would do for a good framework, it is time to set up a framework project.

On your terminal (or Finder), create a folder/directory where your Git repository will be located.

Alternatively, if you are using GitHub, you can directly create the repository in GitHub and clone it in your computer. The benefit of this approach is that you can have GitHub generate the README, .gitignore and LICENSE files for you.

I personally like the .gitignore that GitHub provides, with many exceptions already included on it. See GitHub .gitignore template example

Before creating the Xcode project, we are going to set up two folders where our source code and unit tests will live. These folders will be shared across all three frameworks (iOS, OS X and tvOS). 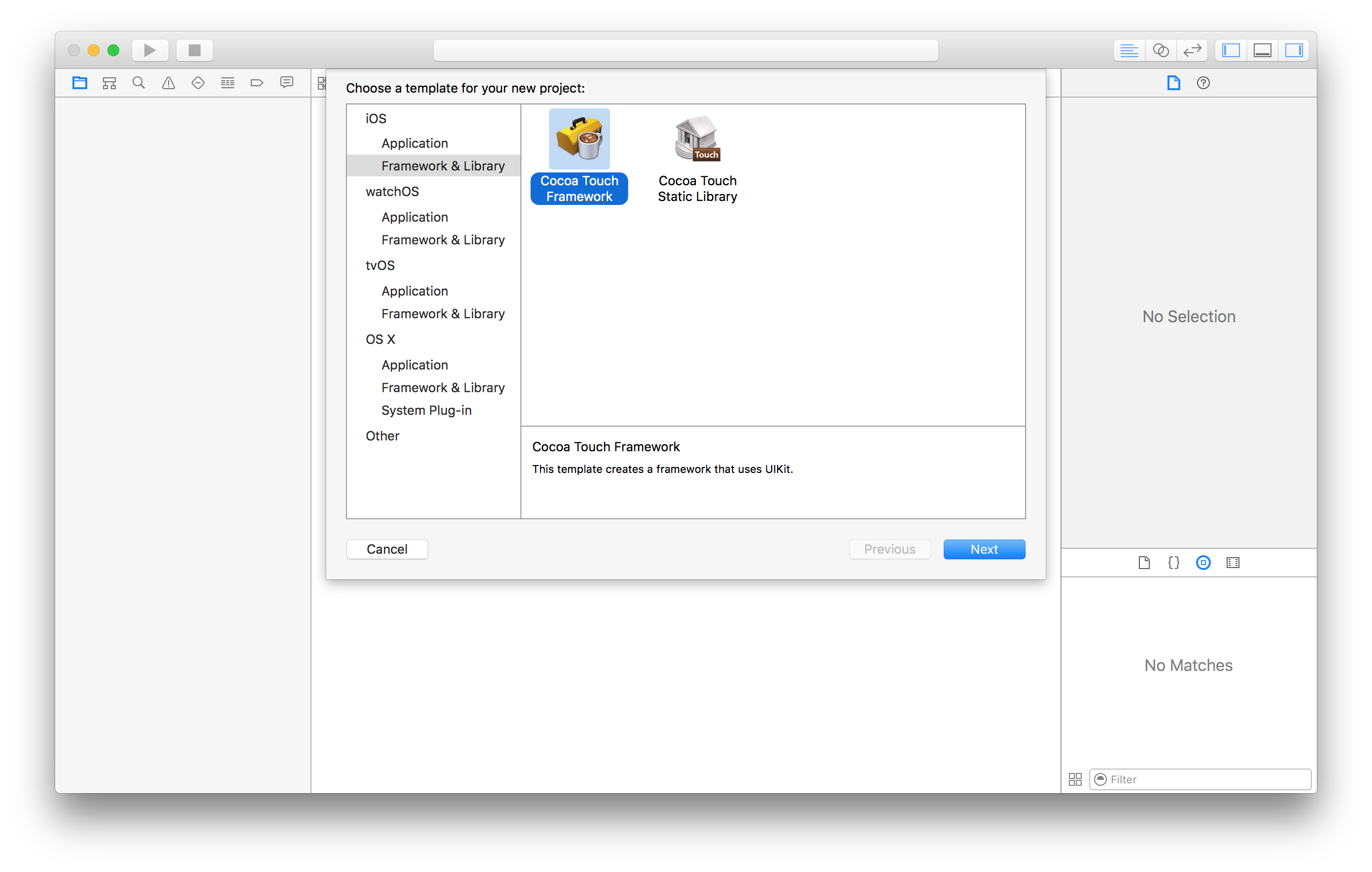 Creating a Framework Project in Xcode 7 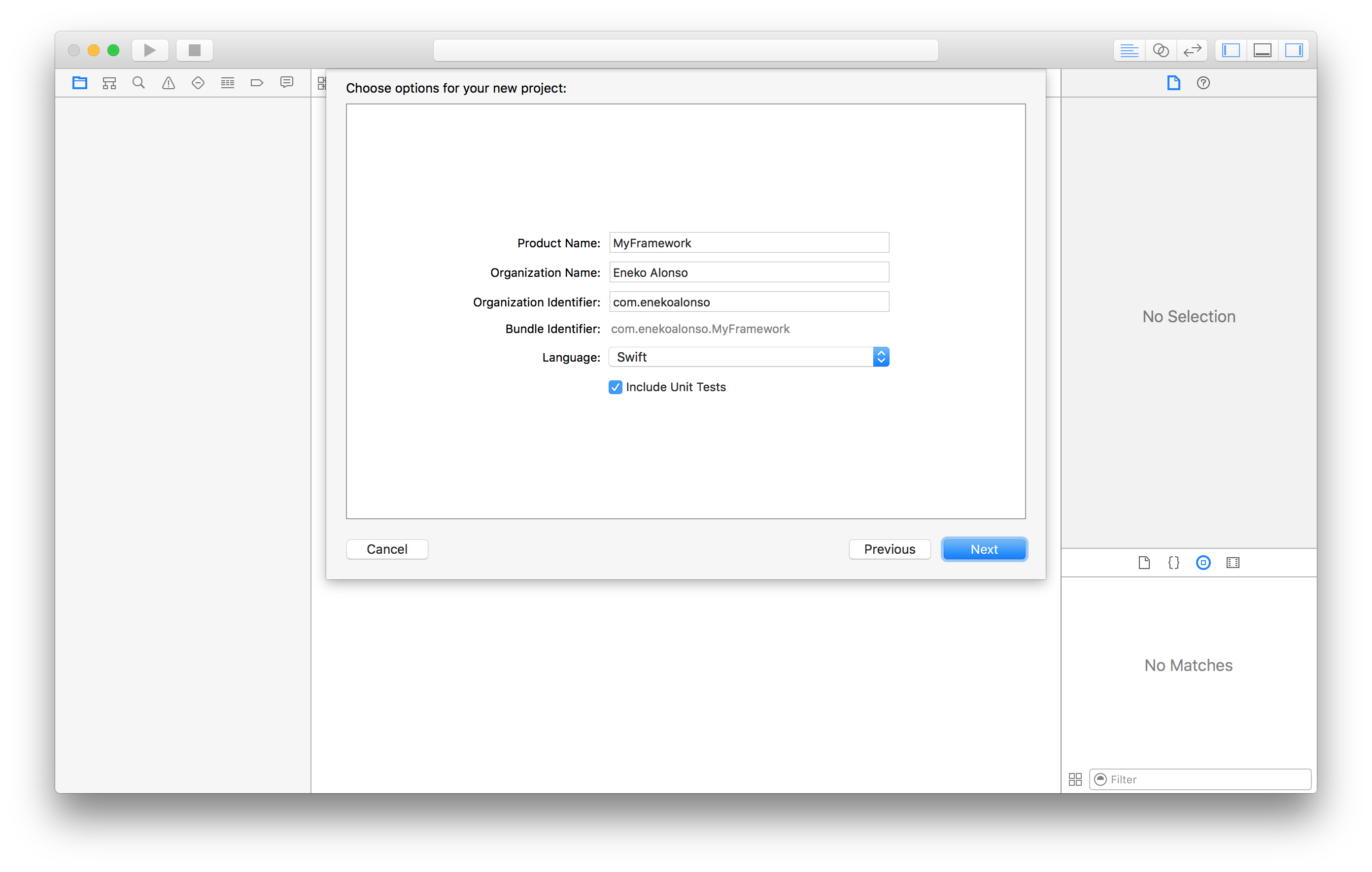 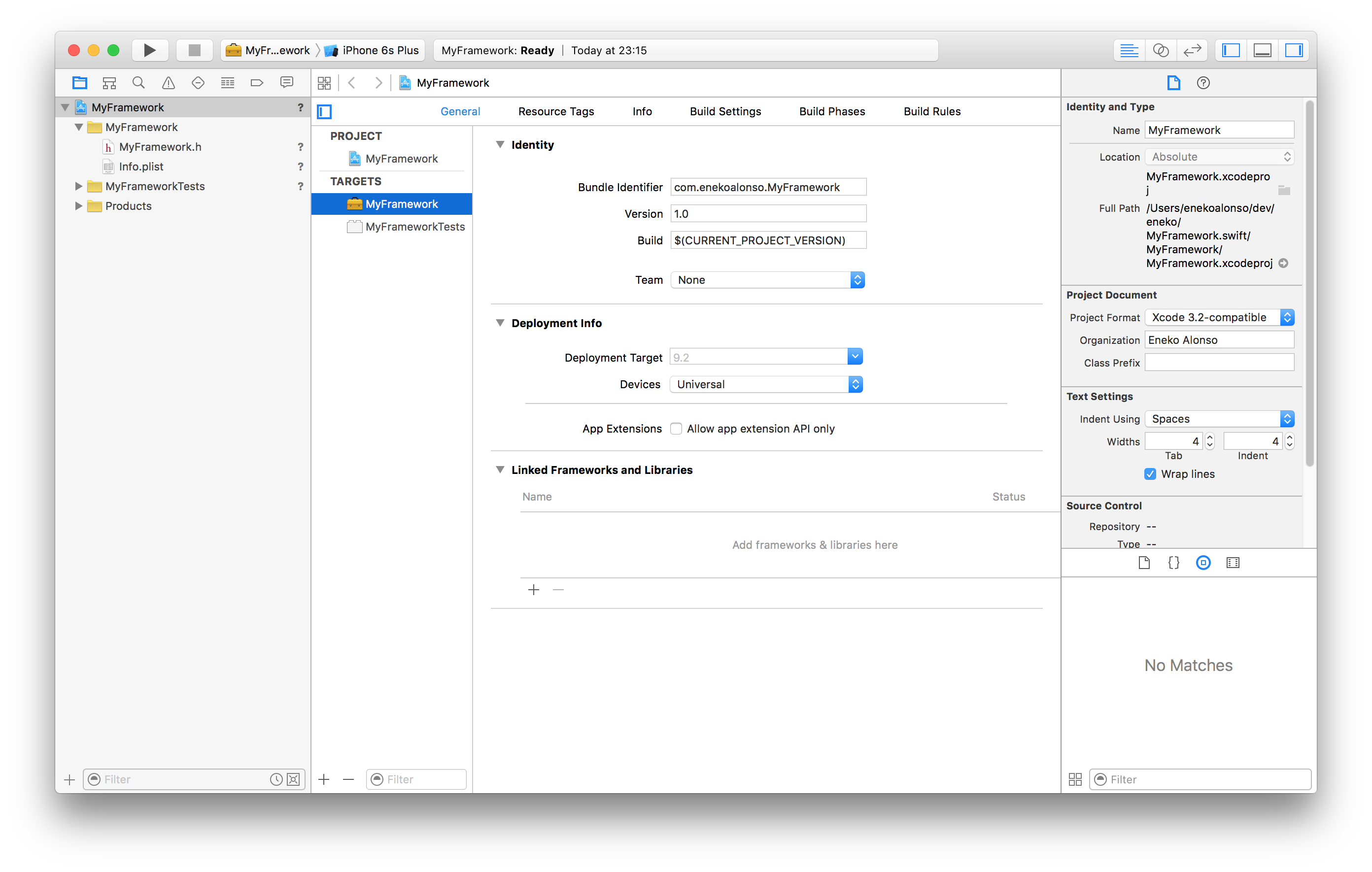 In order to make our framework available in different platforms, we need to create one target for each platform. I like giving them names that relate to each of the platforms, like this:

When we created the project in the previous step, we already selected an iOS framework type of project. This means our project will already contains a target for iOS. In my experience, I found it easier to just remove that target than to rename it and the files associated.

Select the framework and unit test targets on the project target list and delete them by pressing on the - button at the bottom of the target list. 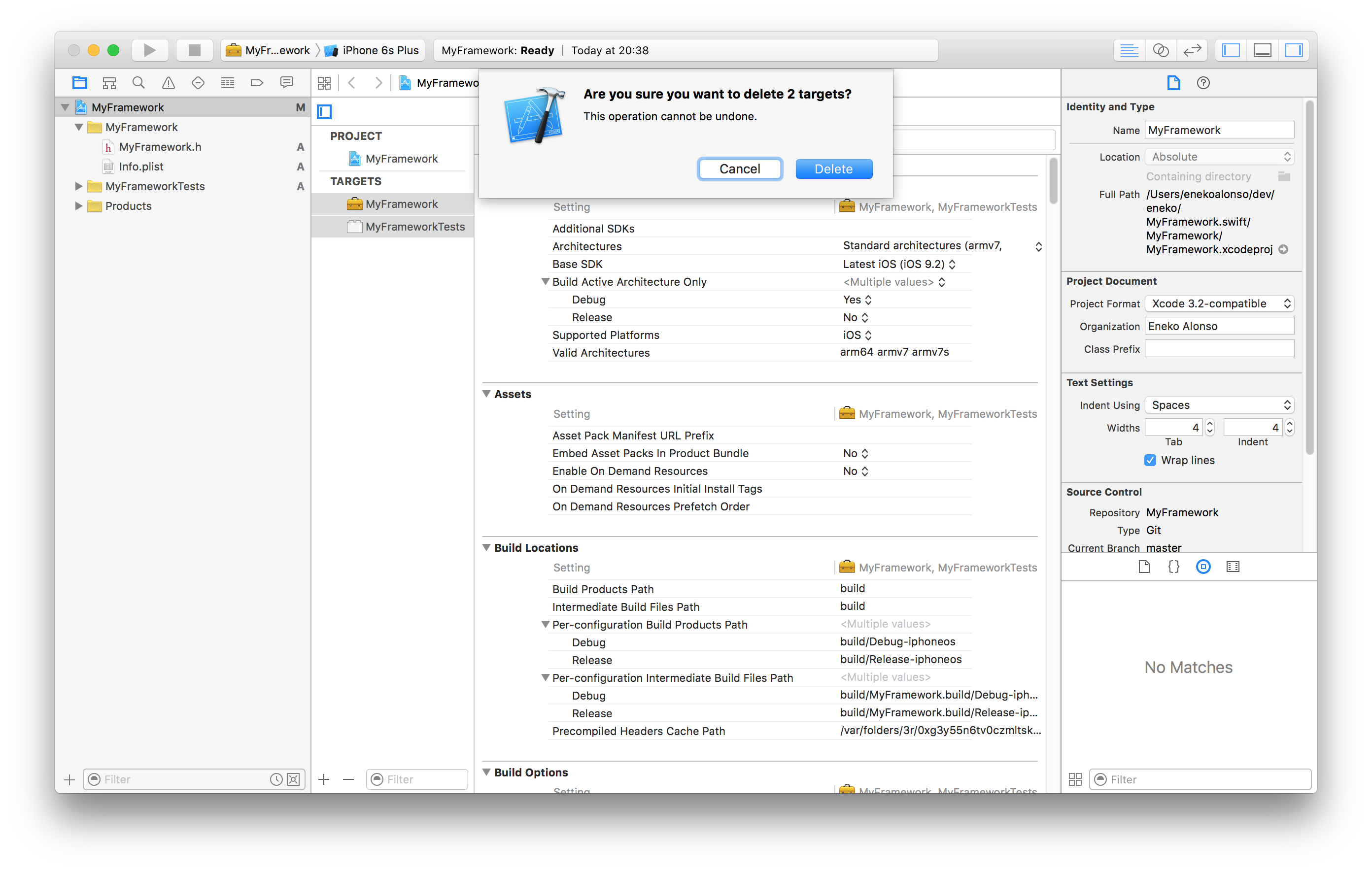 On the project navigator, select the project source files, including the group, and delete them. When asked, select “Move to trash”. 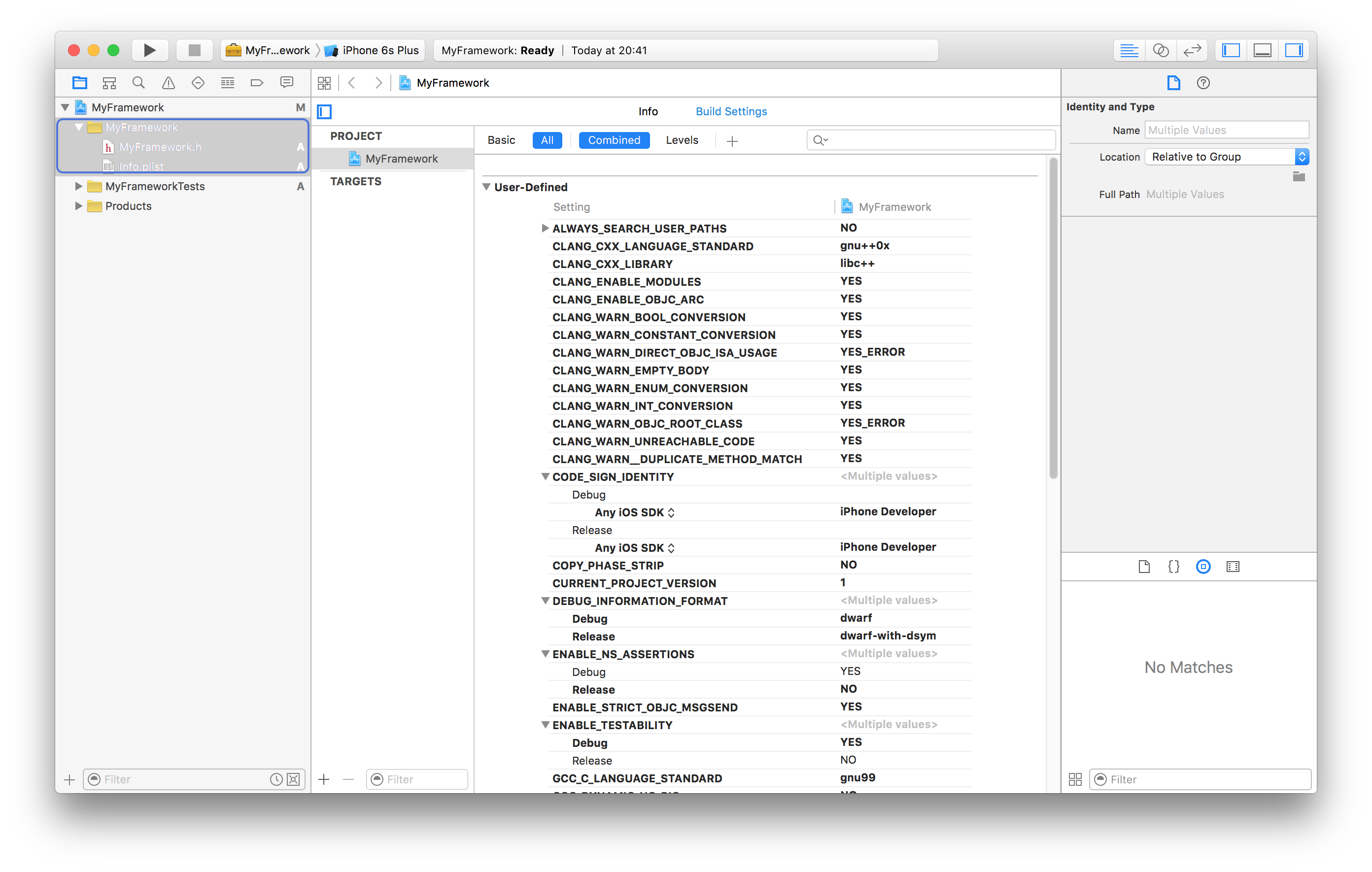 Select the unit test source files, including the group, and delete them. When asked, select “Move to trash”.

Adding a target for iOS

Now that our project has no targets, we are going to add three targets. To add a new target for iOS, select the + icon on the project target list, or File -> New -> Target.... Then choose iOS -> Framework & Library -> Cocoa Touch Framework. 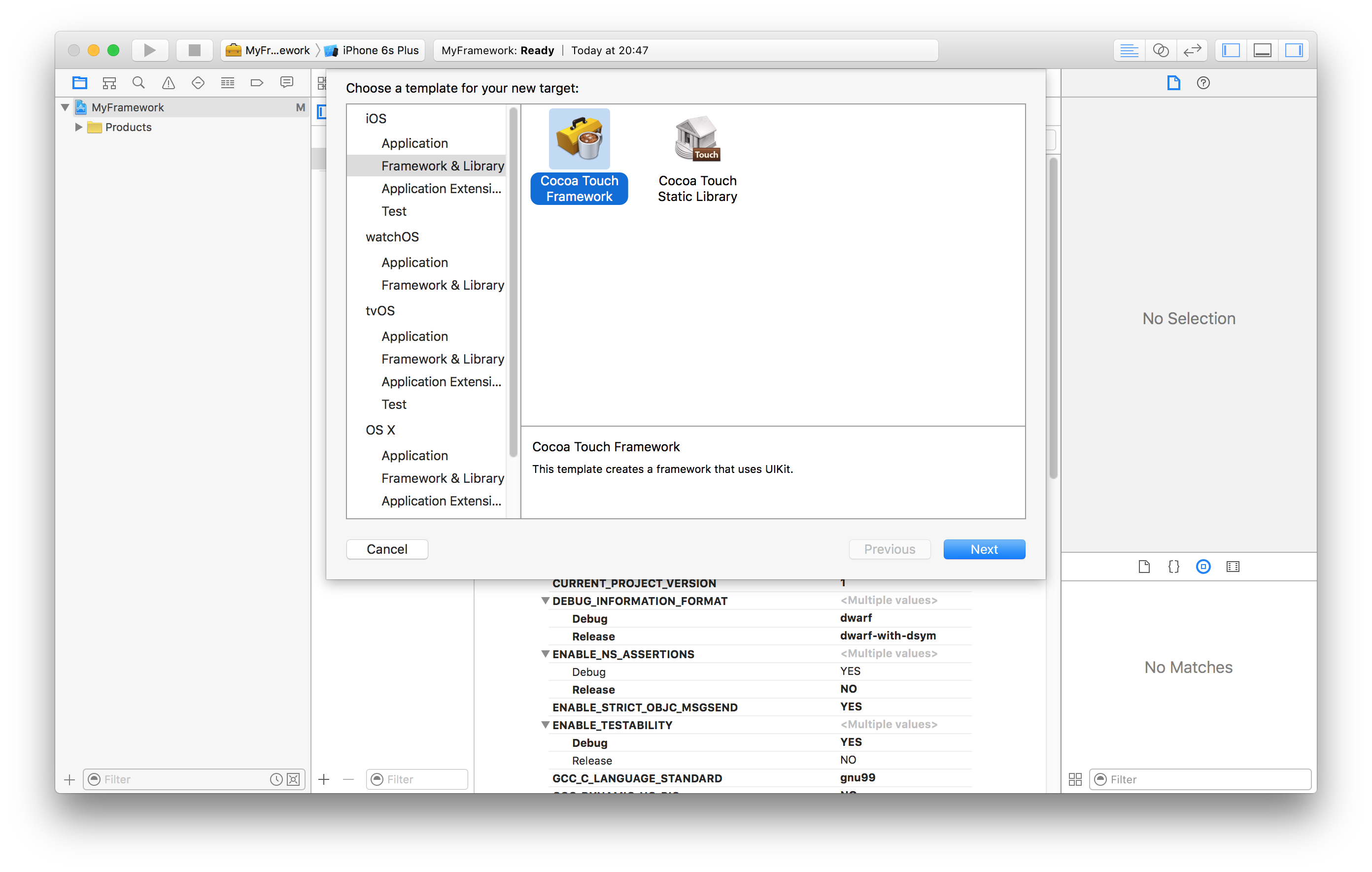 When entering the name, type MyFrameworkiOS.

Adding a target for OS X 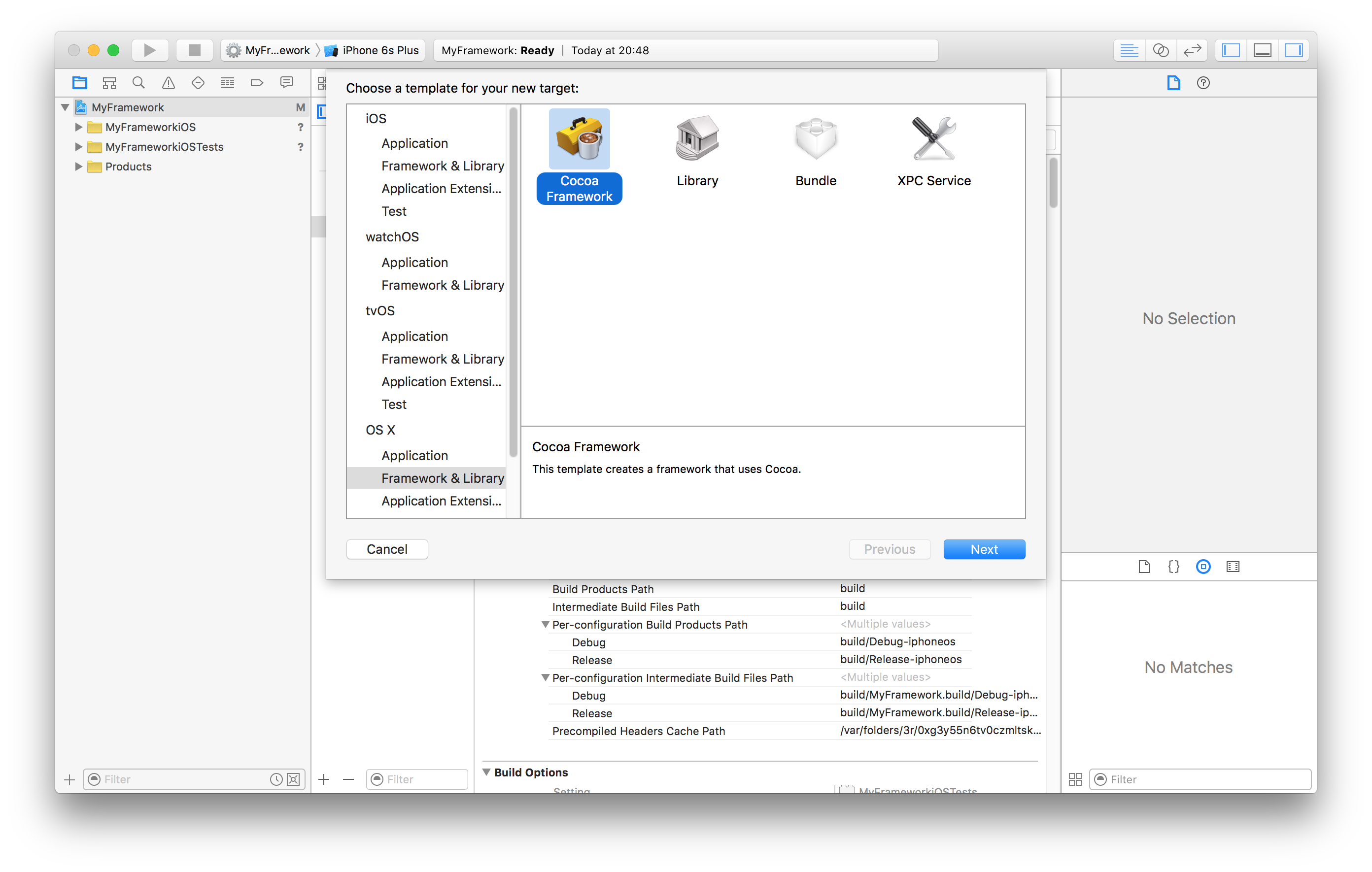 When entering the name, type MyFrameworkOSX.

Adding a target for tvOS 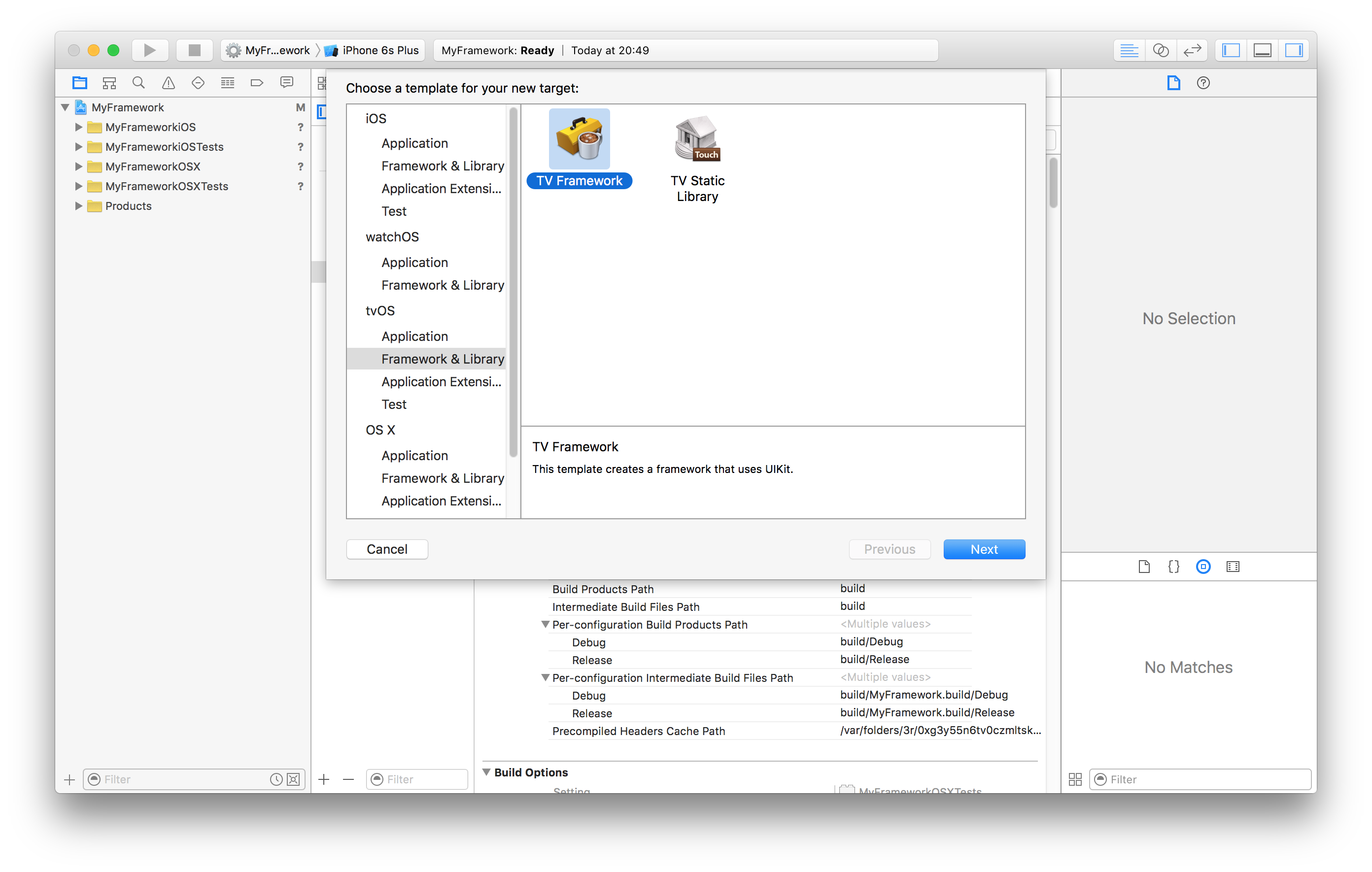 When entering the name, type MyFrameworkTVOS.

Both the project navigator and your project target list should contain these 6 items: 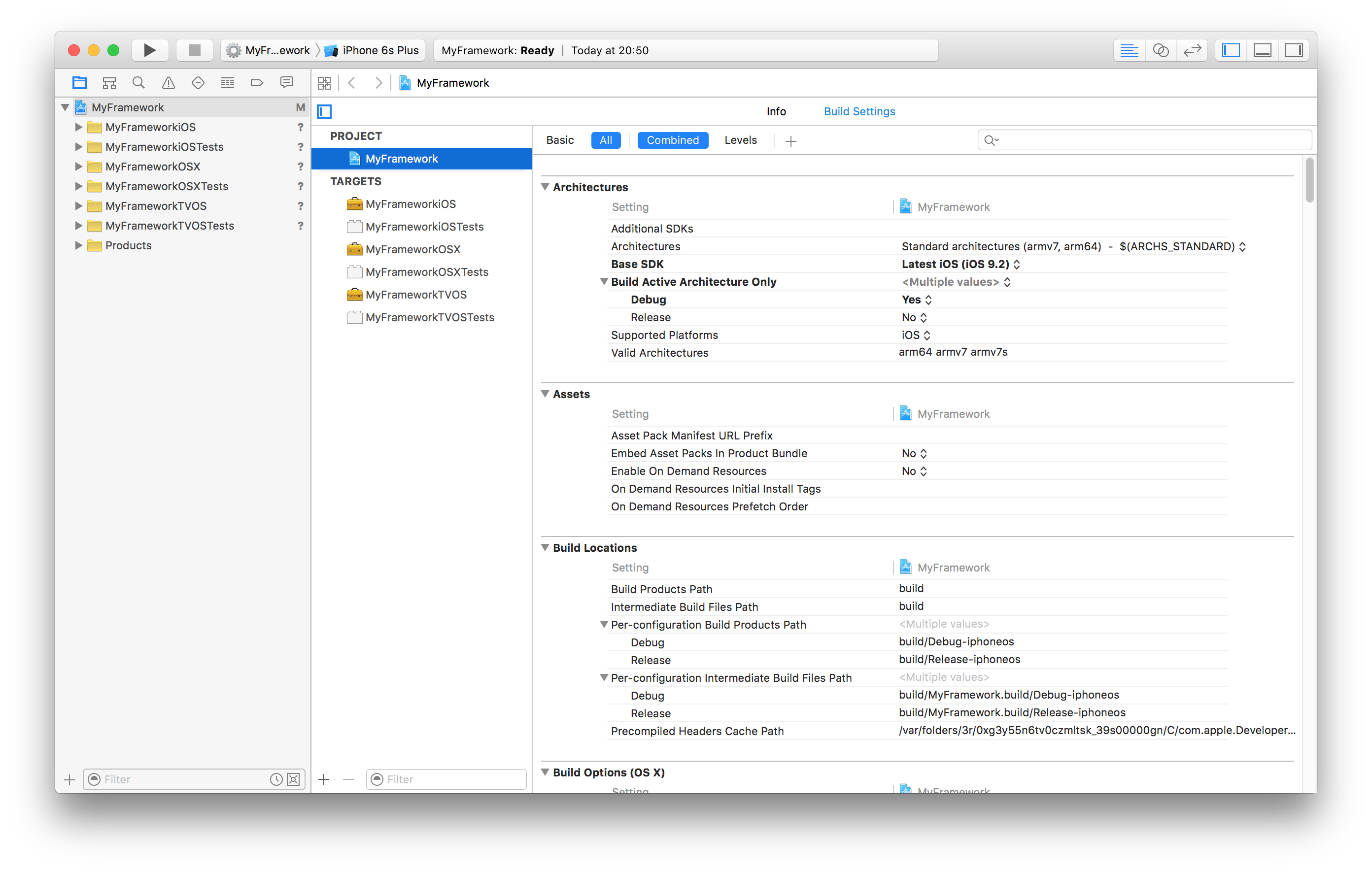 For continuous integration, we are going to configure one scheme for each target. 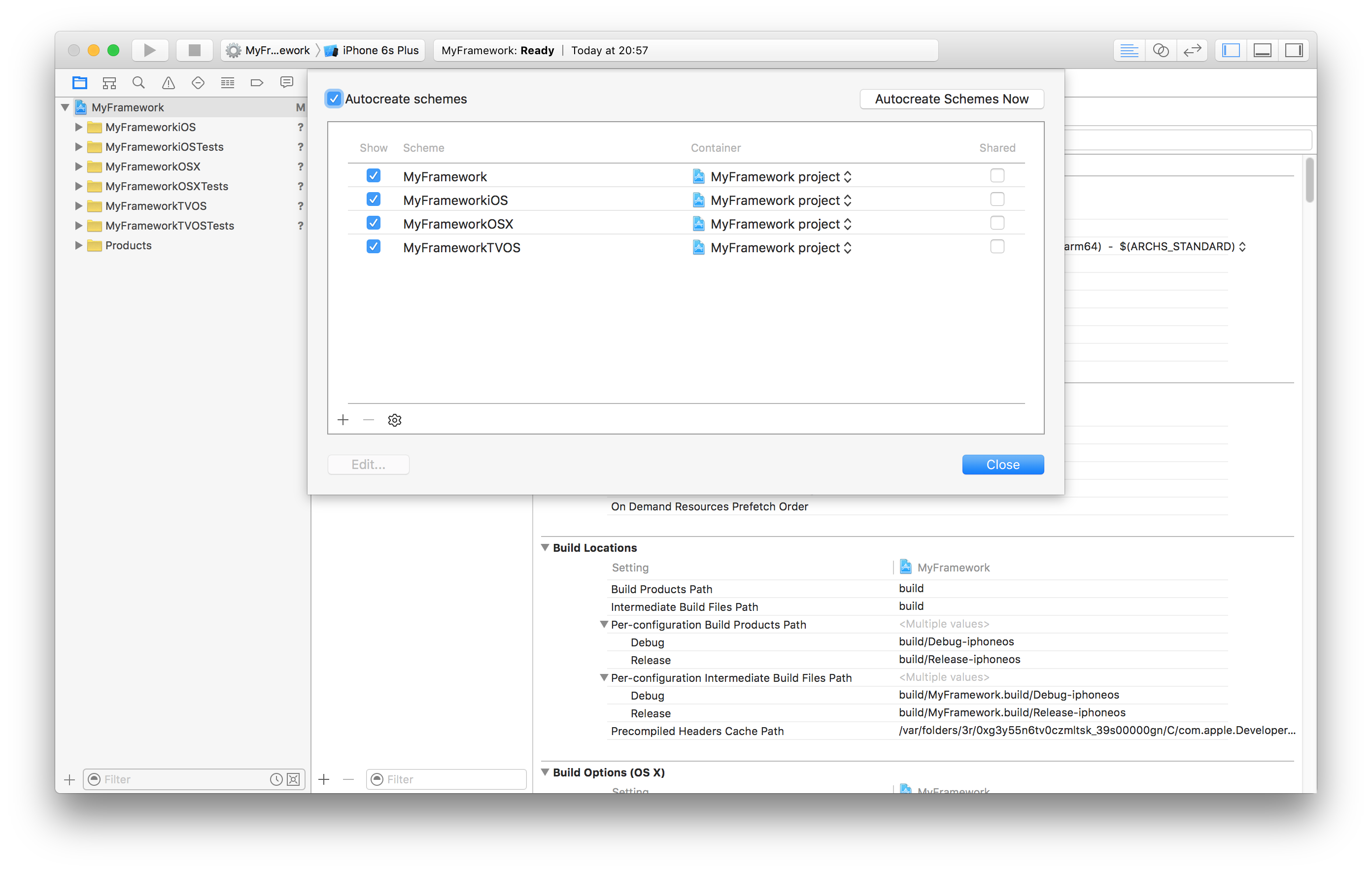 Open Product -> Scheme -> Manage Schemes... and check the checkbox on each one of the schemes matching the targets we just created. In addition, remove the scheme from the old target that we no longer have (MyFramework). 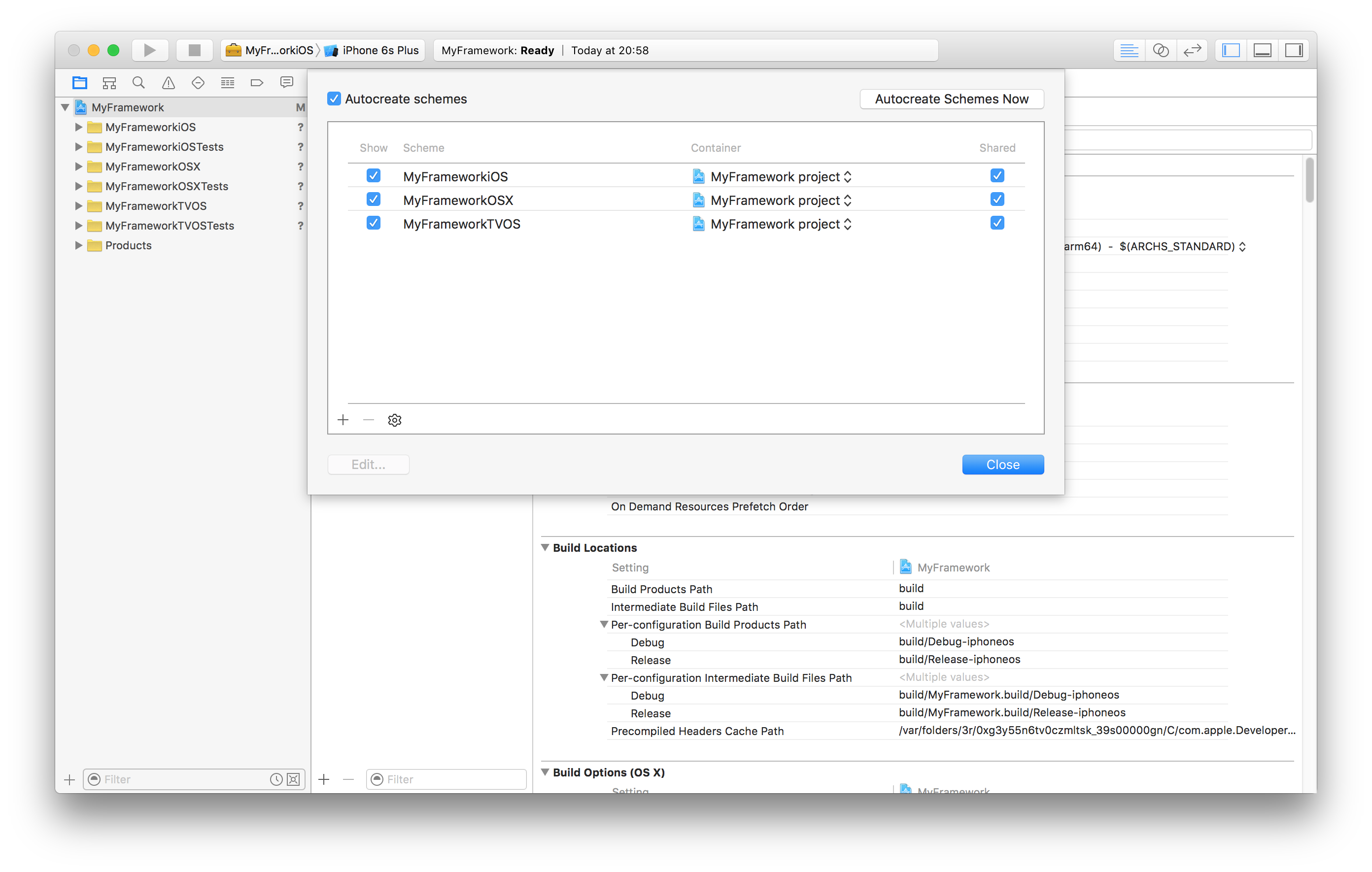 Configured shared schemes for each target

In addition, it is a good idea to enable code coverage for each of the three schemes. Select one scheme after another and press Edit Scheme.... Then, under ‘Tests’, select the checkbox that says Gather coverage data. 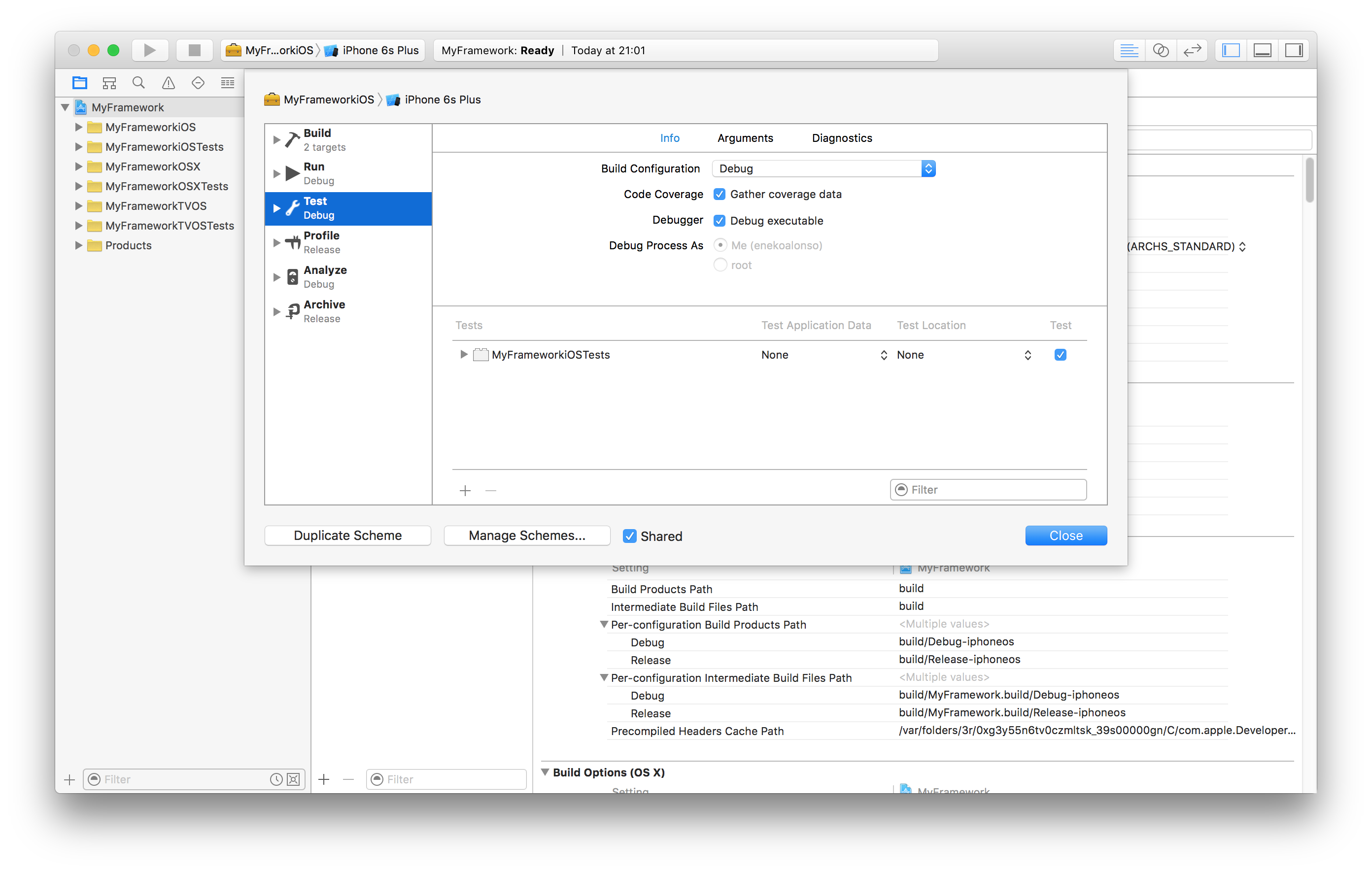 Now that we have our project set up, it is time to add some source code!

Let’s add a sample class to track our car miles:

In our application, we will use the car like this:

Note that because both name and miles properties are non-public, we wont be able to access them from our main application.

Let’s create the file and add it to the project. 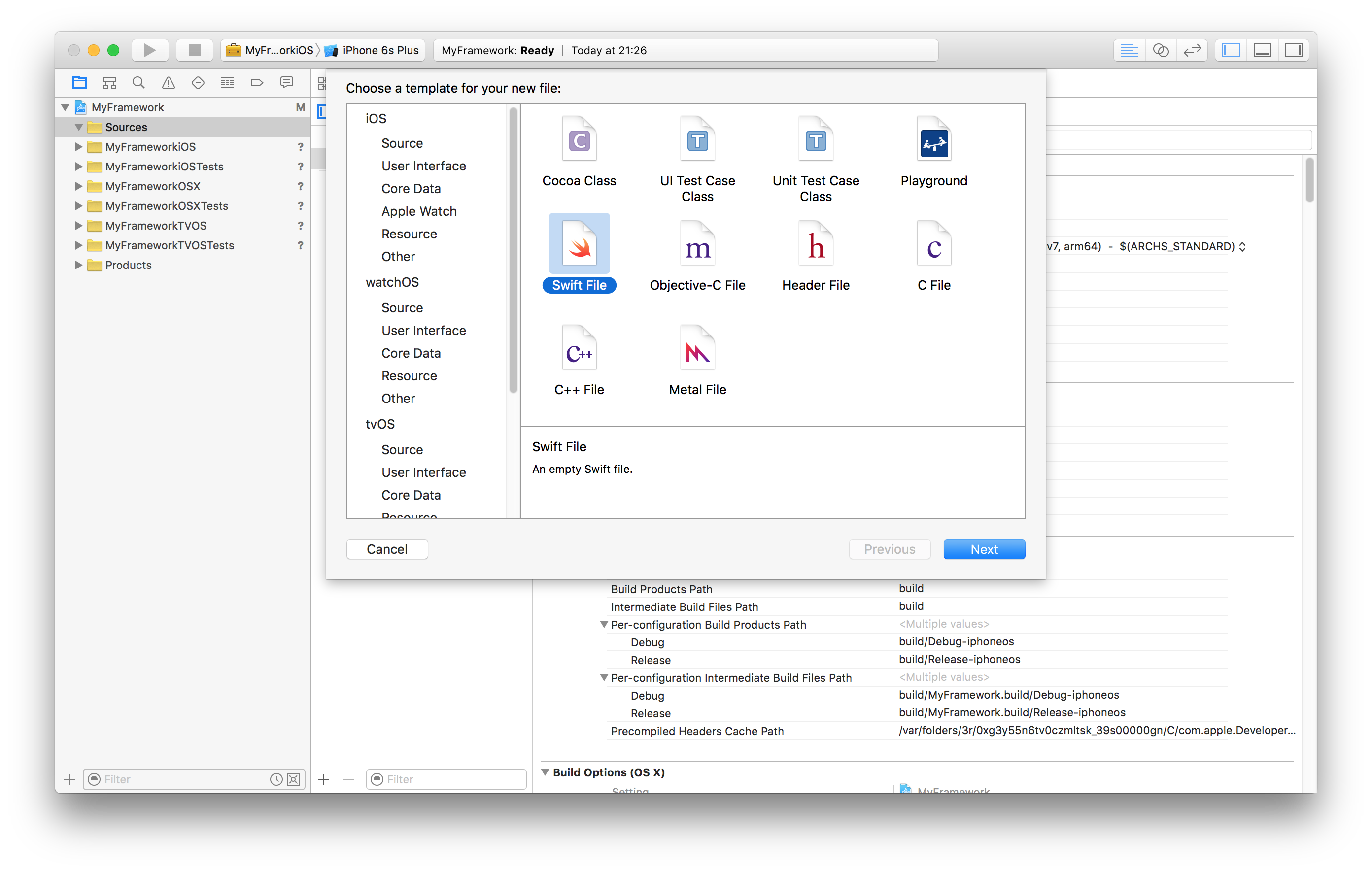 Name the file Car.swift and save it in the Sources folder. Check that it is being added to the Sources group and that all framework targets are selected. 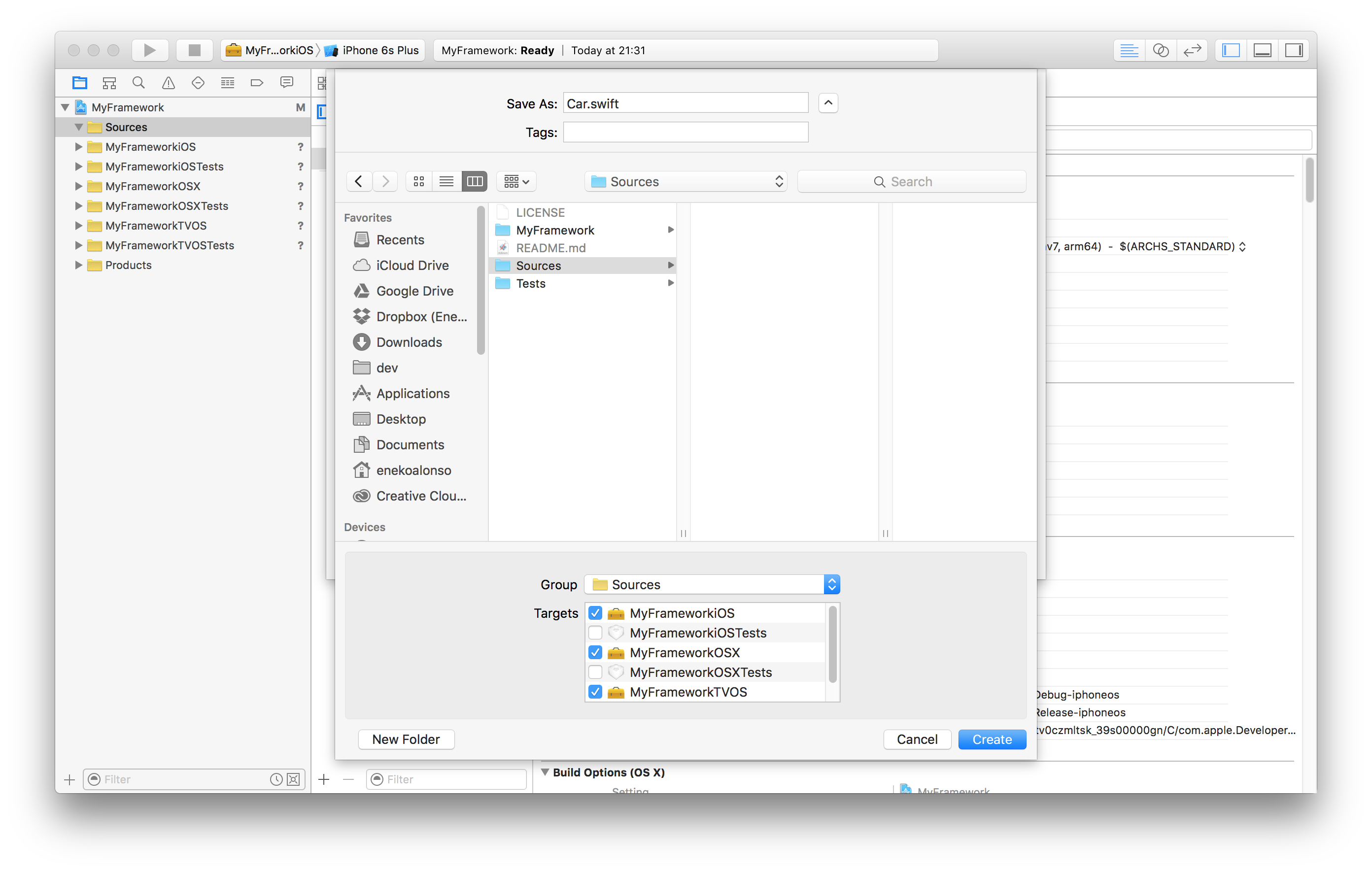 Copy the code from the class above and paste it in Xcode. 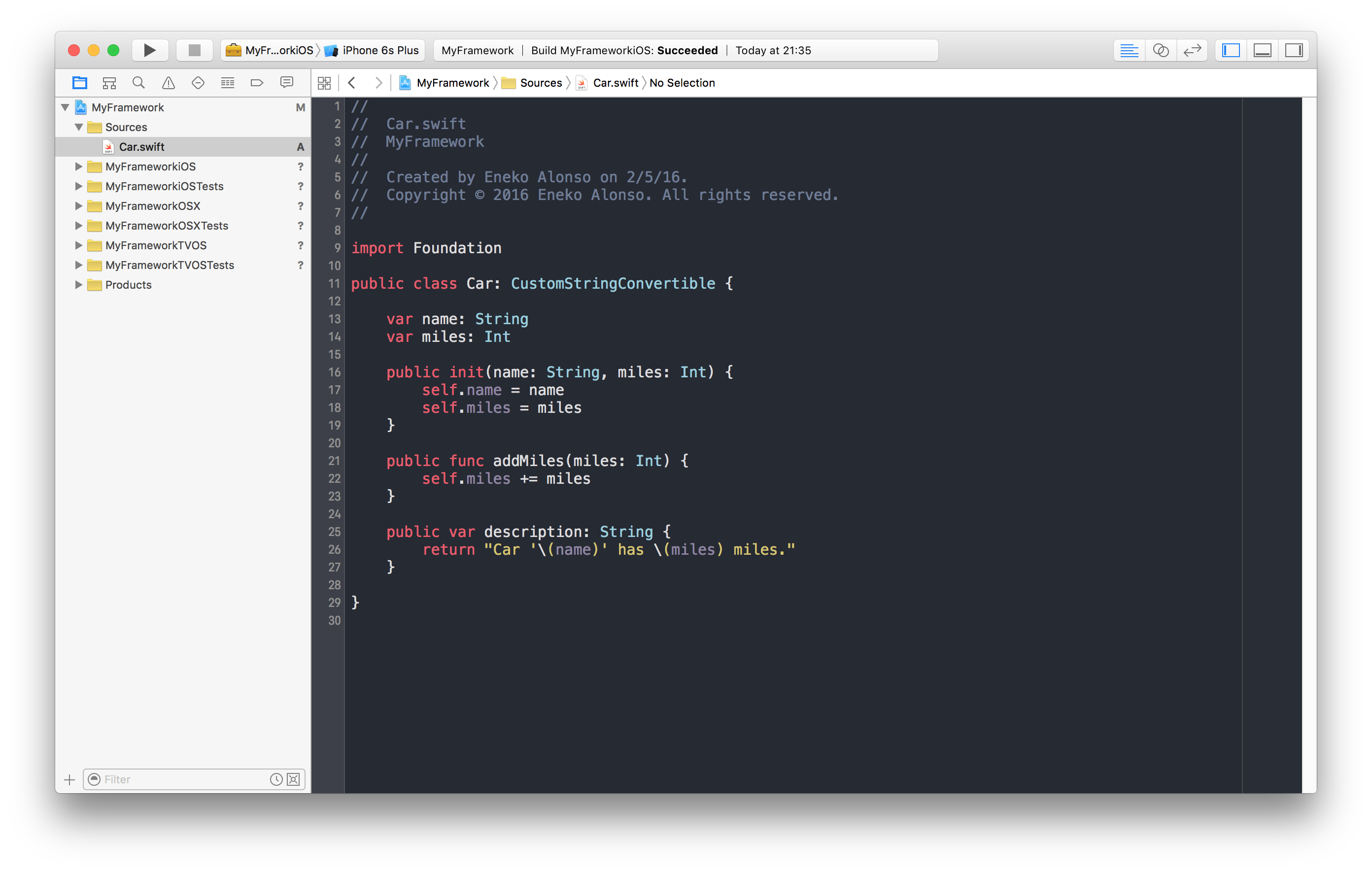 About Public and Private

TL;DR: Only those entities flagged as public in your framework will be accessible from the outside.

In Swift, the public keyword indicates the code flagged as public will accessible from outside the current module.

However, for an application to be able to access the source code inside a framework, it is necessary to use public to expose the entities that we want to make accessible.

Contrary to public, using private can actually make your code harder to test. Xcode 7 has a new feature that enables importing frameworks with @testable import, which makes it possible to test non-public code. However, it cannot test private code.

Because modules do not expose non-public entities outside of the module, there is no need to use private anywhere in the framework code.

Now that we have some working code, it is time to test it! How else could we guarantee our code does what we designed it to do?

Same as our source code, our goal for our tests is to share as many tests as possible between all three frameworks. To do this, we will add our shared test source files into the Tests folder we created when setting up the project. Then we will assign the test source files to all three unit test targets.

We are going to write two tests.

The first test will create a new car and check the description is correct.

The second test, will create a new car, add some miles, and verify the description is the one expected.

Let’s create the test file and add it to the project. 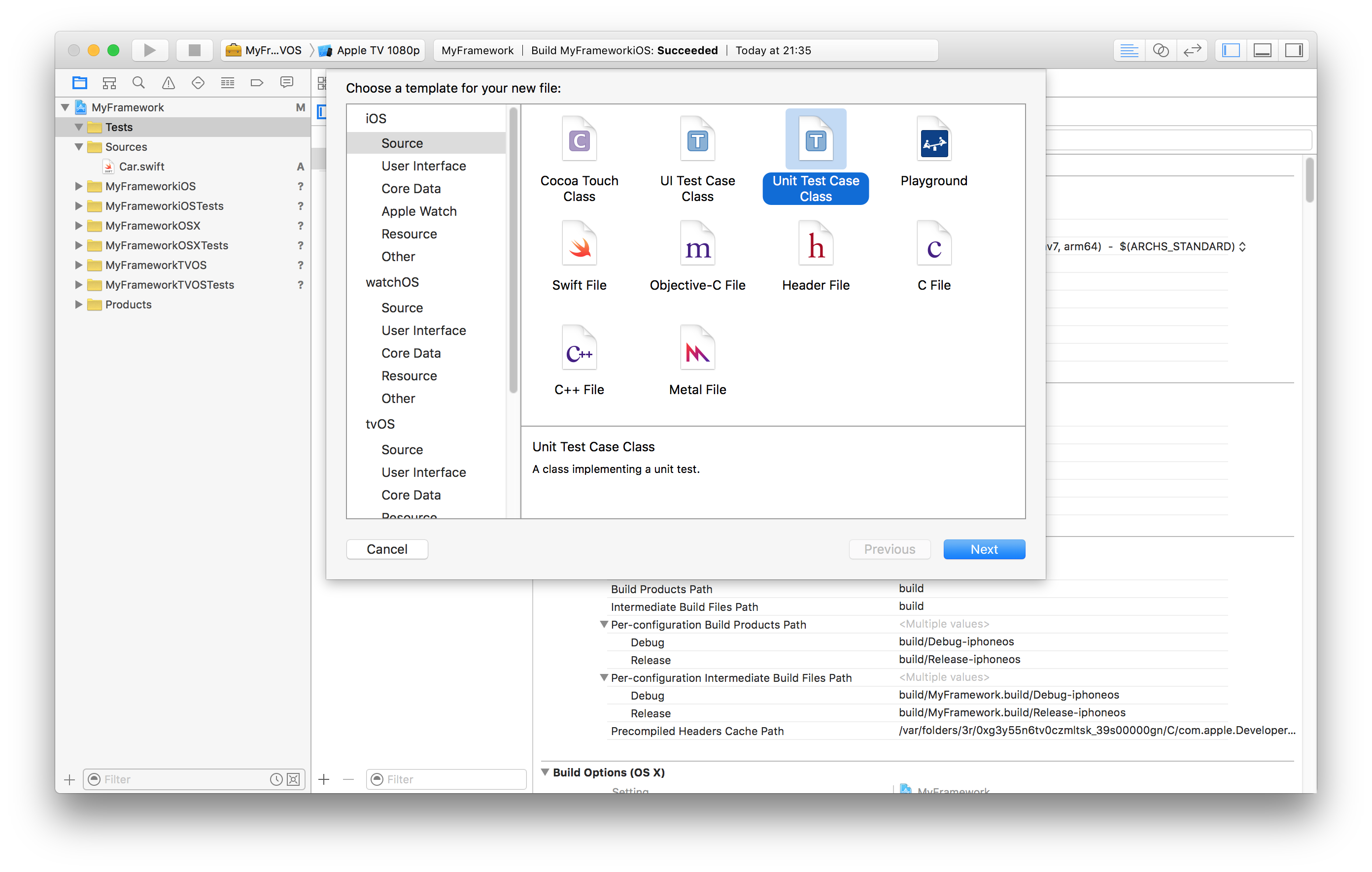 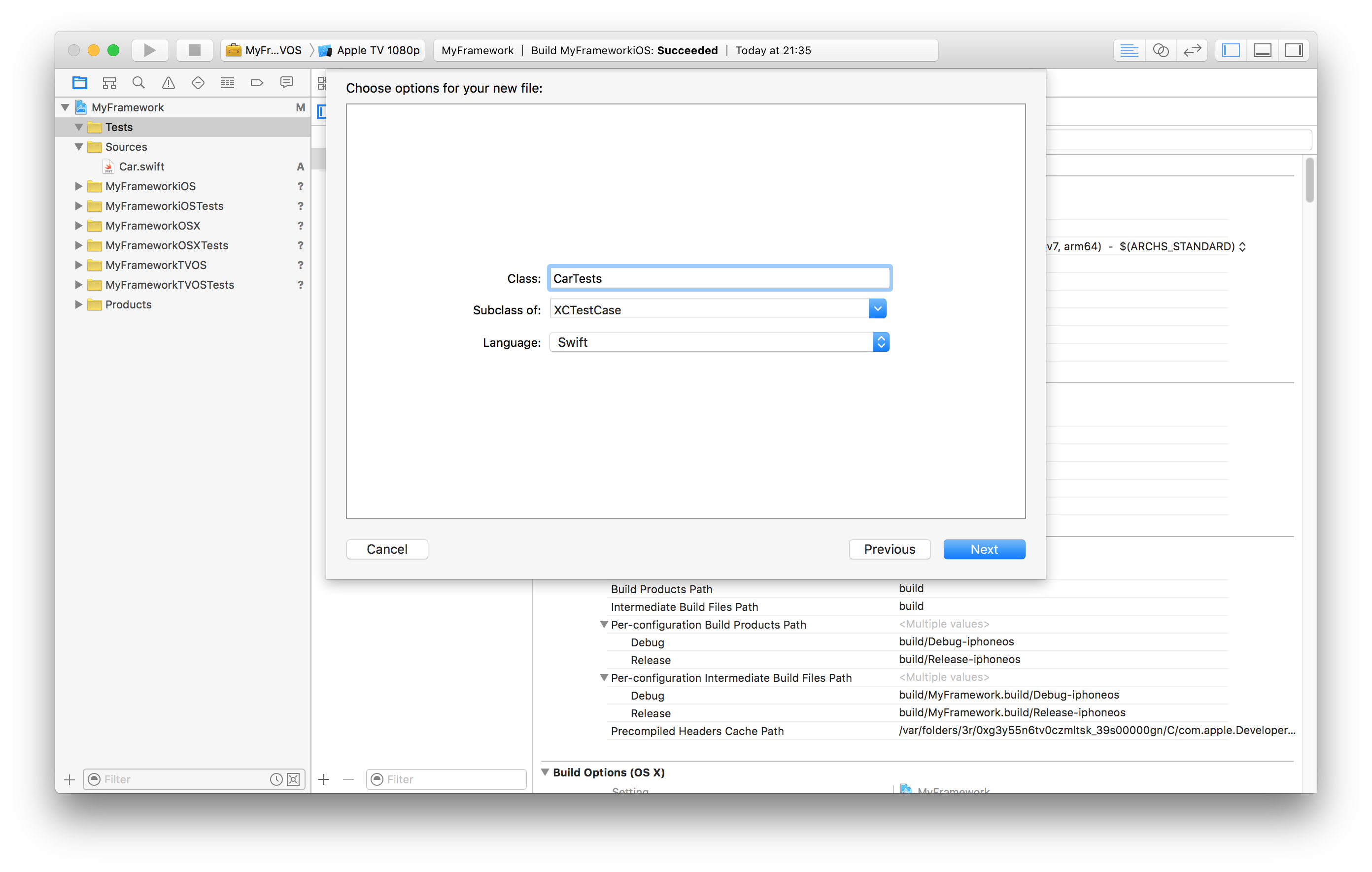 Name the file CarTests.swift and save it in the Tests folder. Check that it is being added to the Tests group and that all unit test targets are selected. 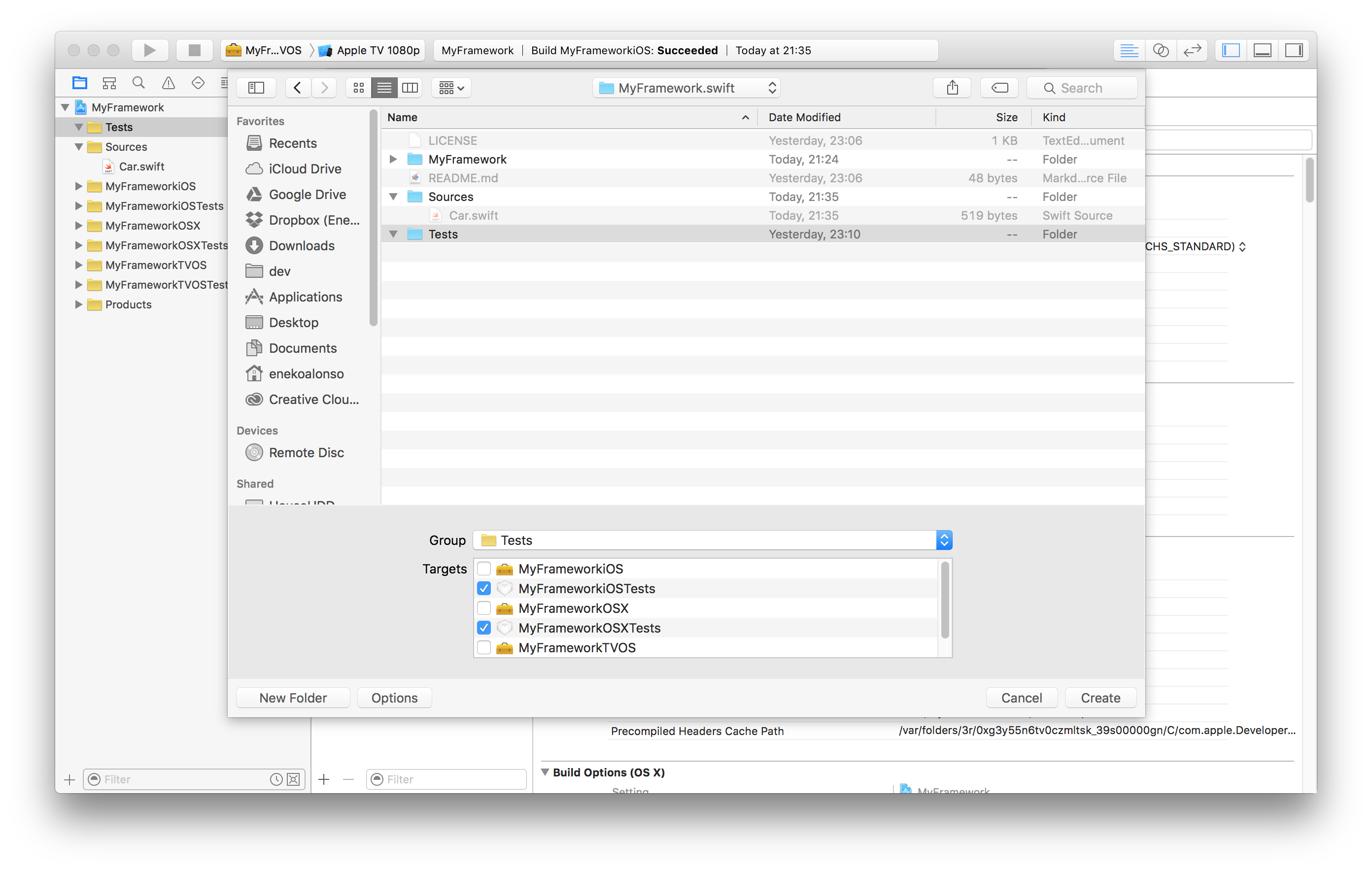 Copy the tests from above and paste them in Xcode. 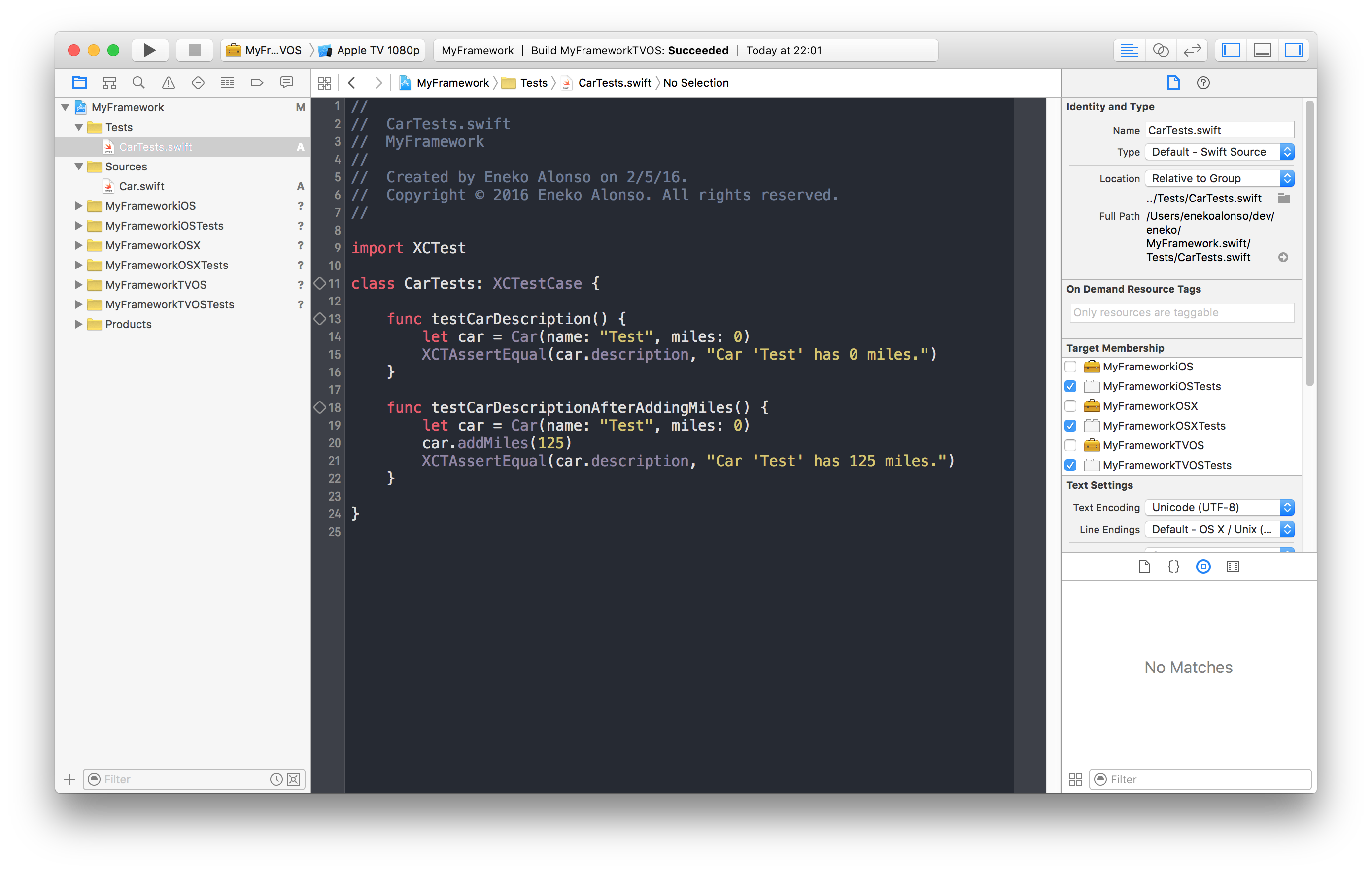 Unit Tests for our Car class

Note that, because we want our CarTests Unit Test Case to be used on all three frameworks, we wont be able to use @testable import to import our Car class.

Instead, we will have to add the Car.swift file to all our unit test targets. 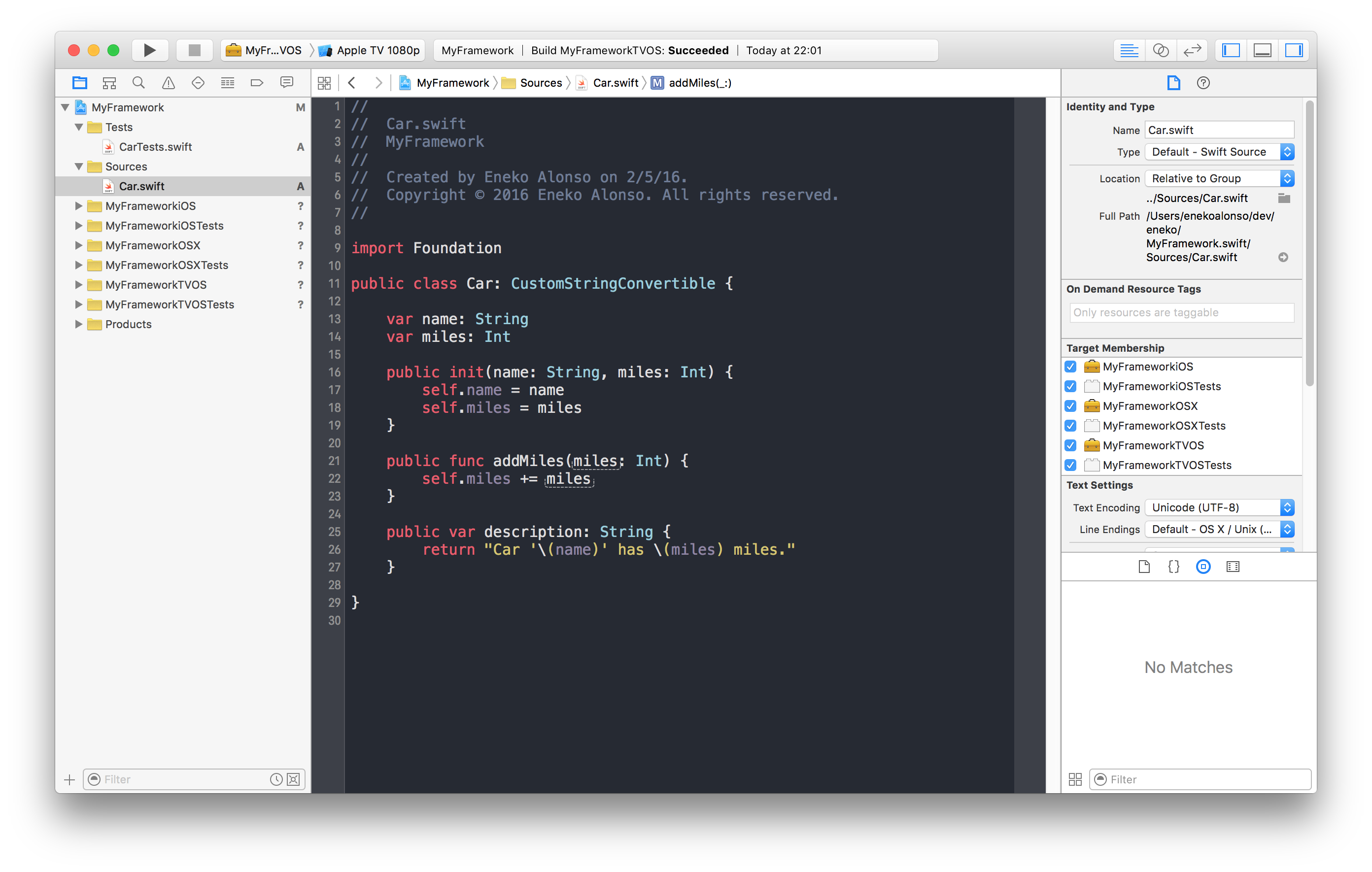 Testing each target manually is as simple as selecting the correct scheme in the Xcode build configuration and then running the tests (⌘ + U).

Our tests results should be all green for each of our frameworks. 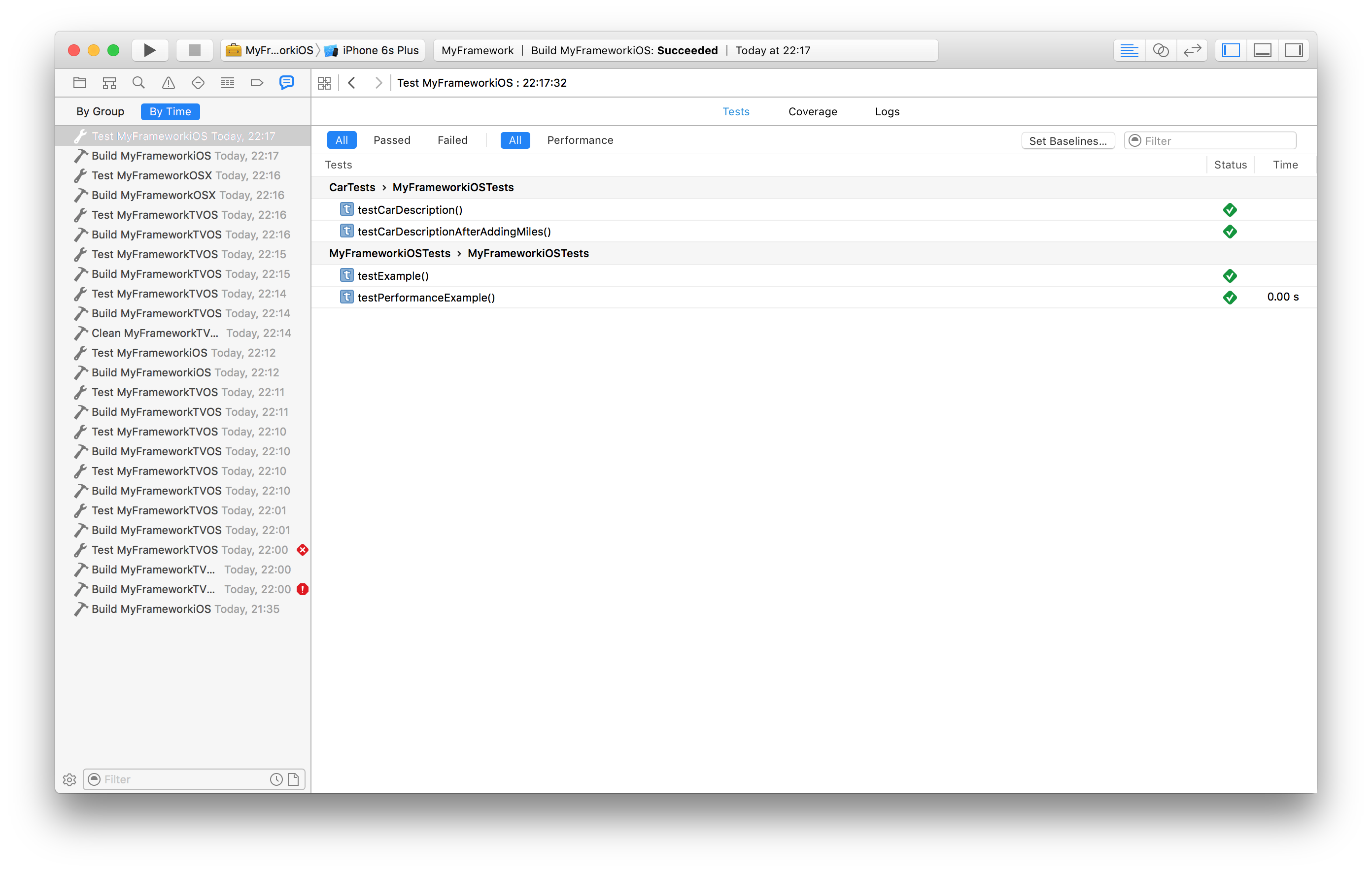 In addition, our coverage should be 100%. 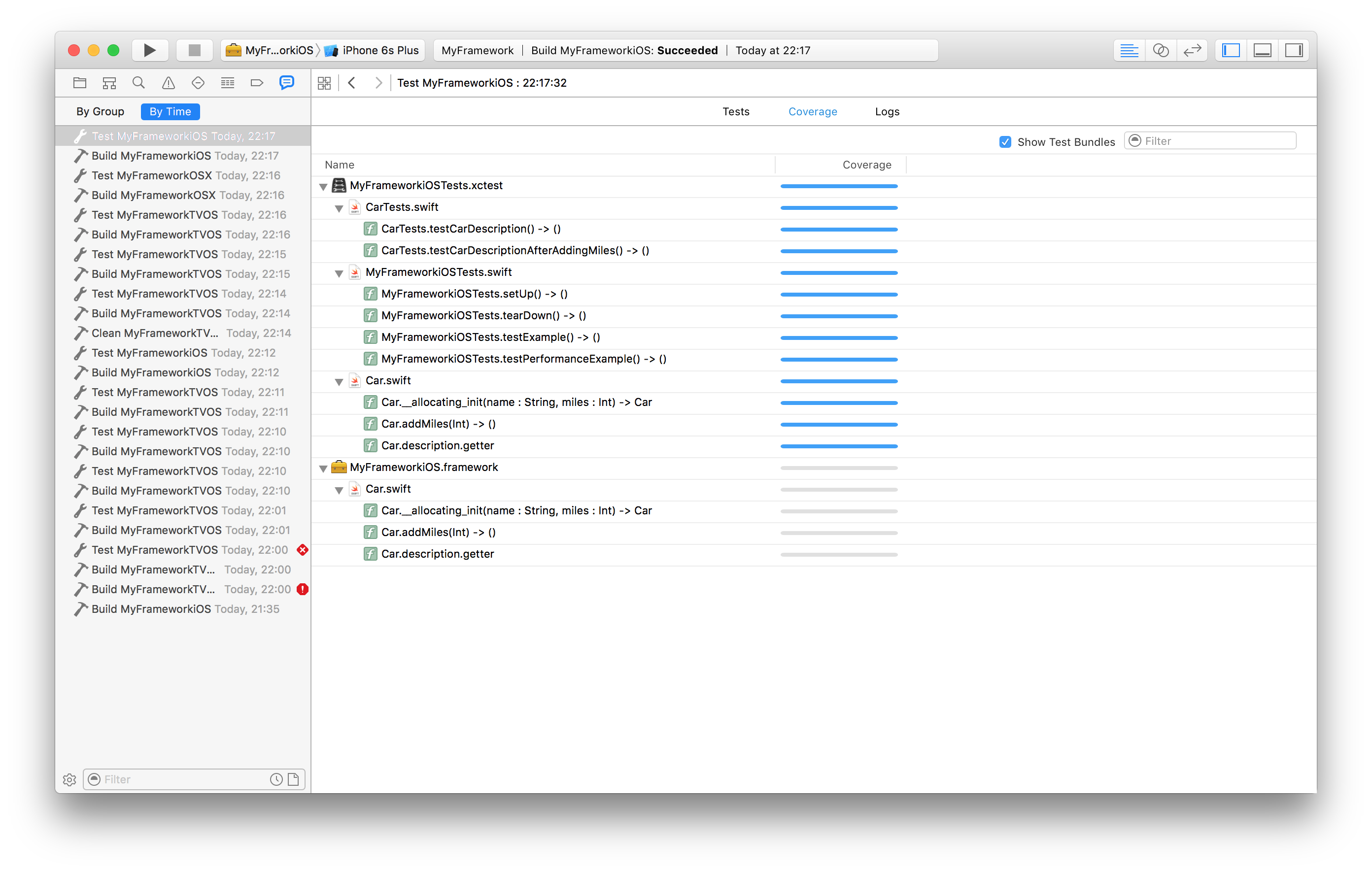 Note that since we are including the source files directly into the test bundle, the coverage will only appear when selecting ‘Show Test Bundles’ on the coverage report screen.

For continuous integration we will use Travis CI. Travis CI pulls out your code from your GitHub repository, and looks at the .travis.yml configuration file to build your project.

In our case, we are going to configure a build matrix to build and test all our targets.

The above matrix includes a pod lib lint command to be run once for each platform, we will get to that later once we add the CocoaPods podspec file.

The push will trigger a new build. 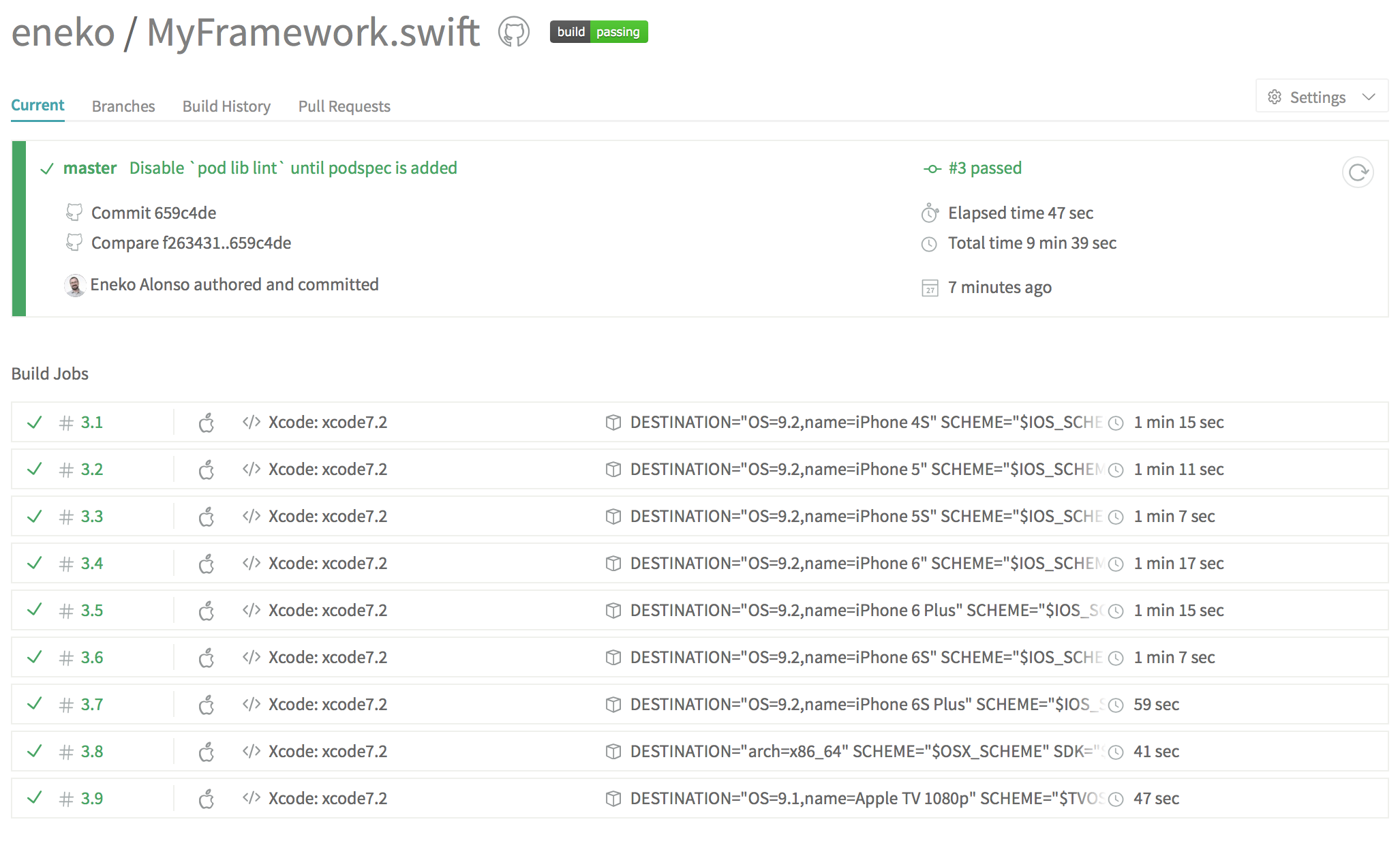 Our build is passing in all platforms and devices

The defacto way to distribute a framework is by archiving it. Select the generic device destination on your project build configuration. You can switch between destinations by pressing ^ + ⌥ + ⌘ + [ and ^ + ⌥ + ⌘ + ].

Before we can archive our frameworks, we need to set the Skip Install setting to NO. 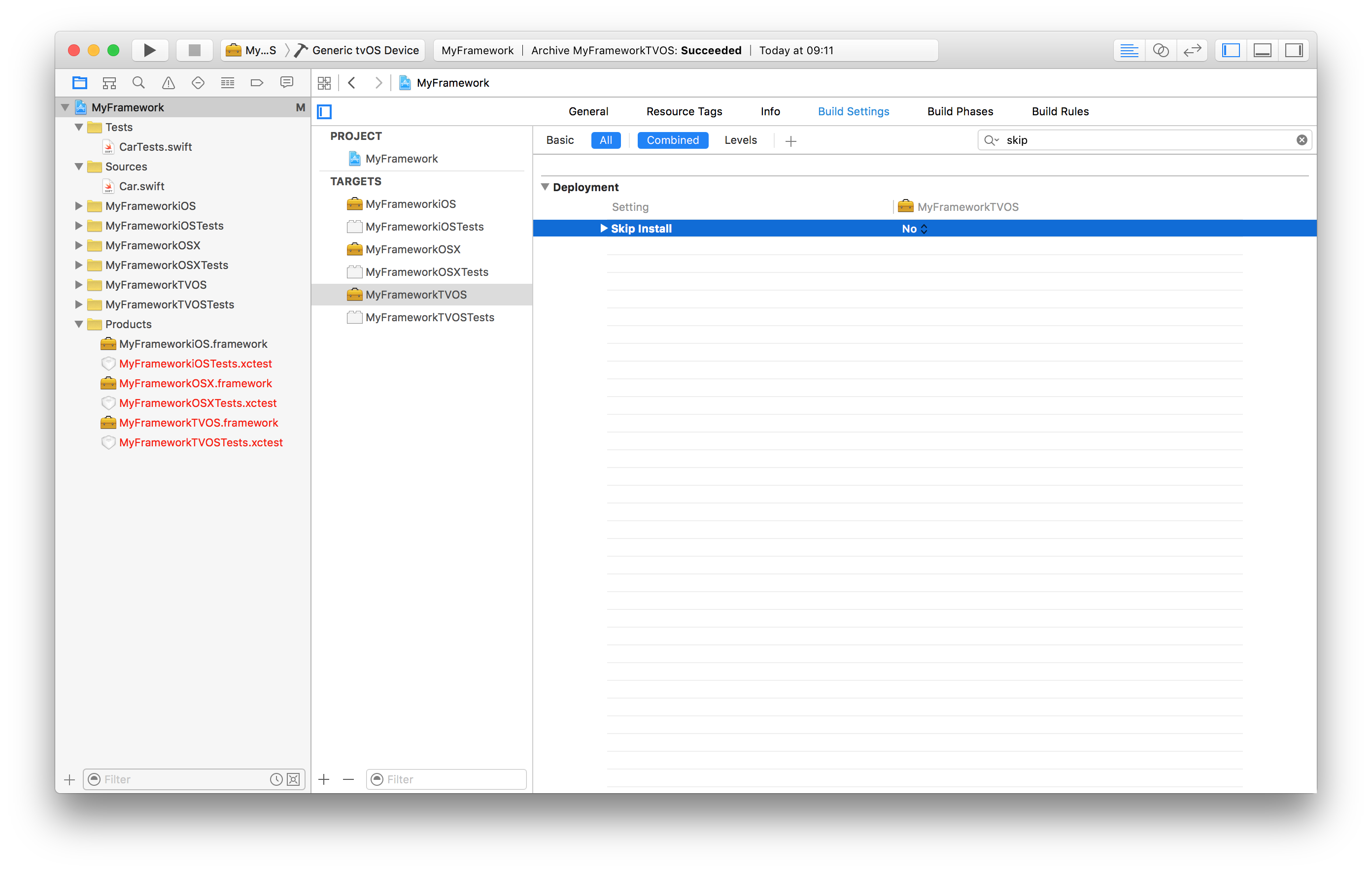 Set Skip Install to NO for all framework targets

To archive your framework, choose Product -> Archive in the menu. The archive will appear on the Organizer. To export it, select Export -> Save Built Products. 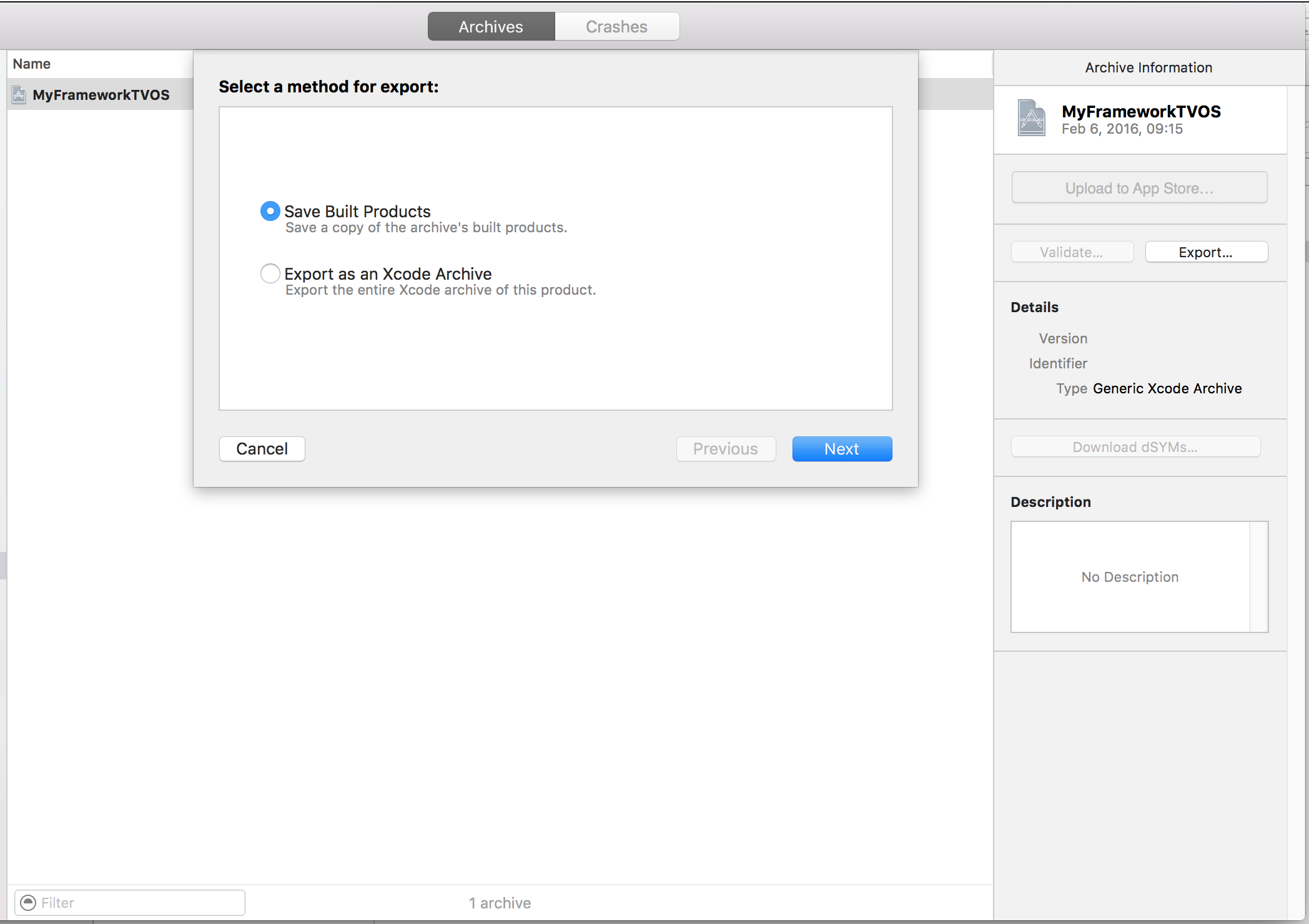 Your framework will be exported to a folder with the framework name and export date. 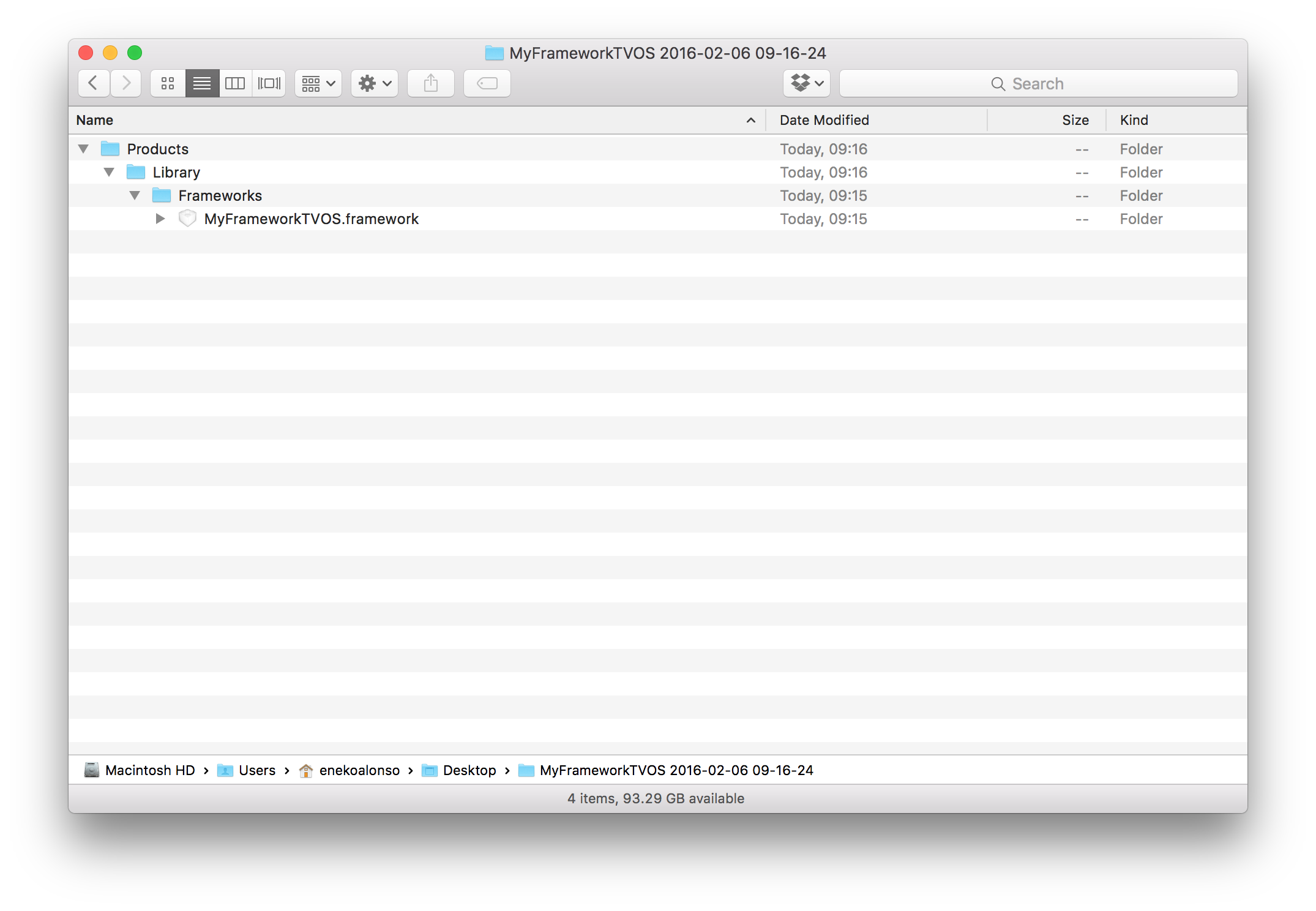 At this point we can zip our framework and distribute it.

To distribute our frameworks via CocoaPods, we need to create a podspec file. In the root of your repository type:

Now, let’s add the podspec file to Xcode, for easy editing, but without adding it to any of the targets. Right-click on the project navigator and select Add Files to "MyFramework"....

Then proceed to edit the MyFramework.podspec file as follows:

To verify the pod works as expected, use the command (add --private if your repository is not public):

The minimum platform versions for a Swift application/framework are iOS 8.0, OS X 10.9 and tvOS 9.0.

To distribute your library via Swift Package Manager, all that is required is to create an empty Package.swift configuration file on the root of your repository.

This is because Swift Package Manager will include by default only those files in the Sources folder, which in our case, contains the source code we want to distribute.

As mentioned before, Framework projects can import dependencies via CocoaPods. Since we have created only one project for all three frameworks, adding CocoaPods will be super easy.

In the terminal, navigate to the folder containing your Xcode project and type the following command:

This will create a Podfile file with some content for your multiple targets. Alternatively, you can also create the Podfile manually with any text editor.

Add any pod dependencies. In most cases, the dependencies will be the same for all three frameworks, so we can create a ruby function to contain all the pods as follows:

Once you have listed your dependencies, run this command to install them (it is a good habit to close your project on Xcode, since moving forward we will use the workspace instead):

At this point, your workspace should contain two projects our framework project with our three targets and a second project from CocoaPods. 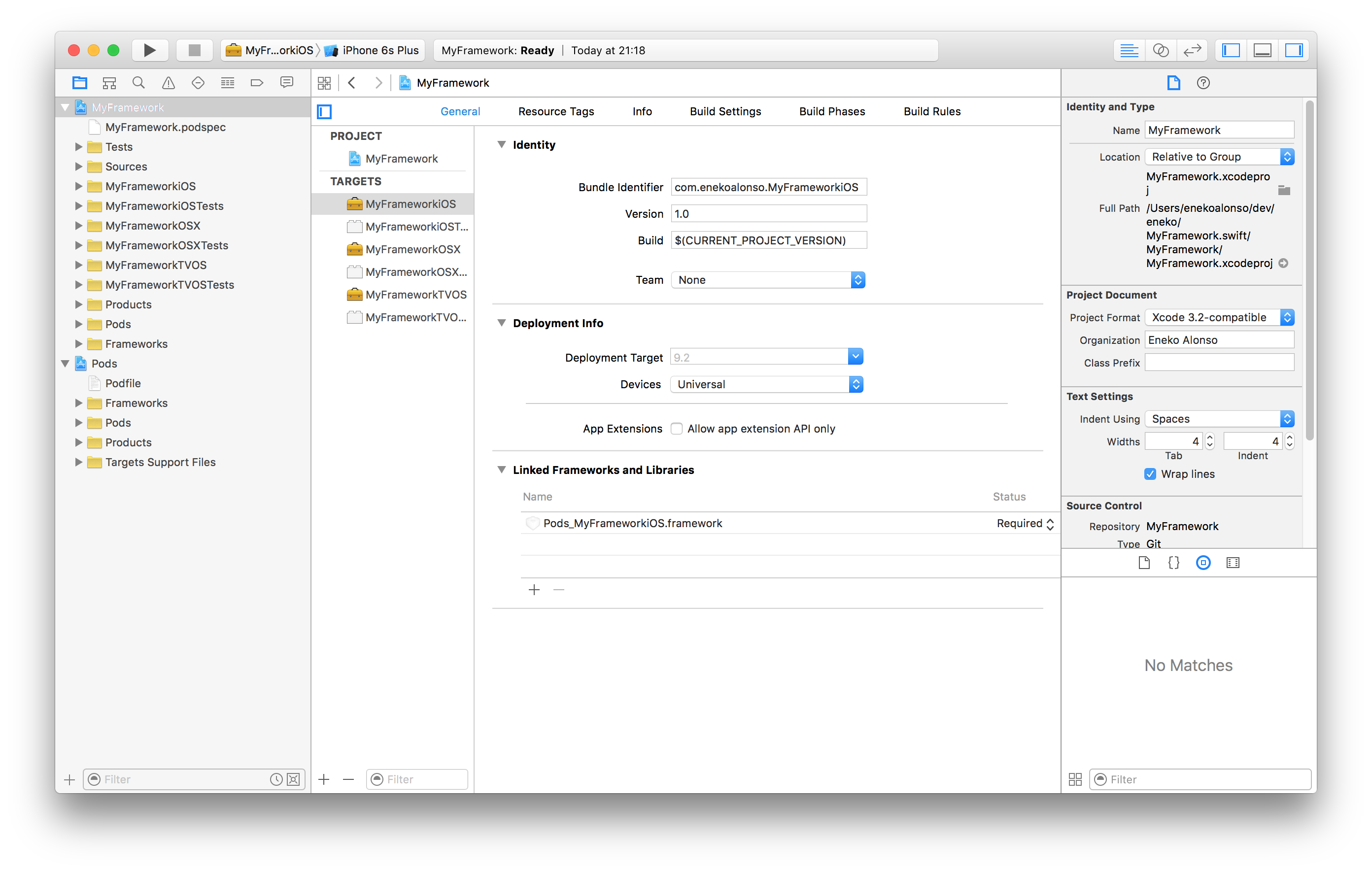 Build and test your schemes, everything should work as before, and all dependencies included in the Podfile should be available for import.

The entire source code for this tutorial is available on GitHub: